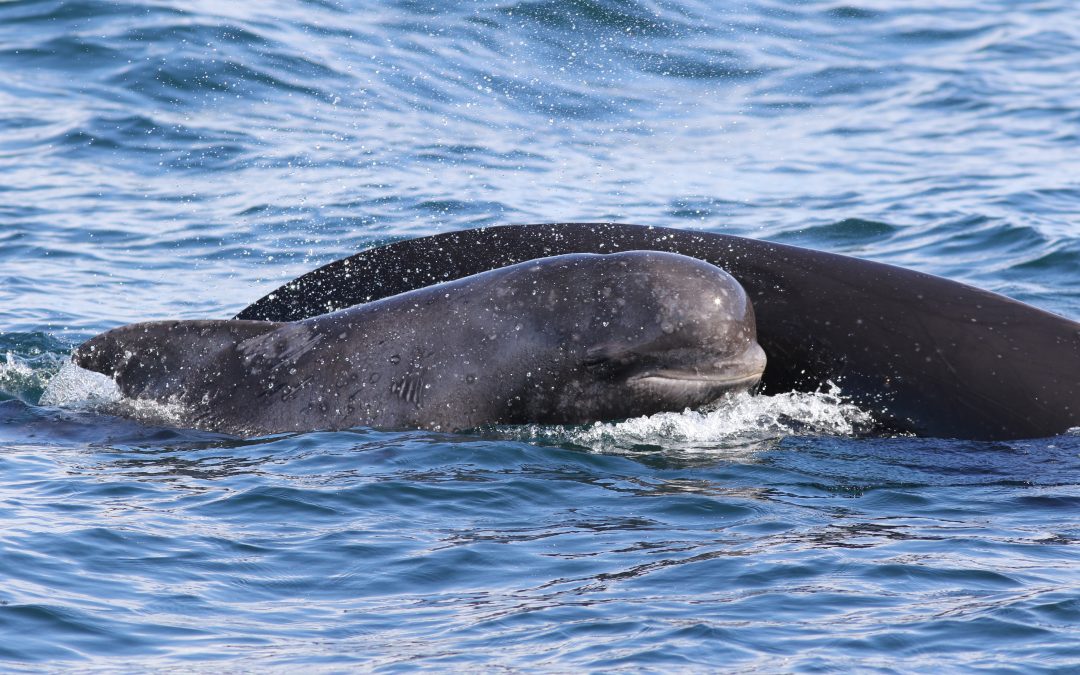 August whale watching sightings returned to form and were fantastic as the pilot whales showed up in their traditional numbers. Why? To put it simply, in July we didn’t get the weather for whale watching, but in August we did. In July, the winds were akin to the winds we normally get in June. This delay in the arrival of traditional June winds means that there was a delay in traditional summer weather, which also delayed the arrival of the pilot whales normal food. No food equals no whales. Lots of factors contributed to the delay in the June winds, such as the warming of the Gulf of St. Lawrence, and this could be a trend moving forward; we’ll have to see as time goes by.

Regardless, we are delighted to have had such a wonderful August of whale watching inline with our traditional sightings numbers. However, the summer was not without tragedy. July ended with a dead pilot whale sighted at Cabot’s Landing Provincial Park, where a pair of sharks fed on the carcass. MARS, Marine Animal Responce Society, arrived, studied the whale and buried it on site in early August.

On August 19th, Oshan Whale Watch’s Cheryl Fraser and Elizabeth Zwamborn of the Cape Breton Pilot Whale Project sighted an emaciated pilot whale, once more, at Cabot’s Landing. The whale was seen going under and did not come up. It is presumed dead and its body was not recovered.

The sadness continued and at the end August, Oshan Whale Watch helped locate and facilitate a partial-necropsy of the cherished pilot whale, Double-Dip. He was discovered in Northern Cape Breton waters floating beside the Hammer, a rock formation North of Meat Cove, and eventually washed ashore east of Bay St. Lawrence on August 26th. Reaching the pilot was no easy task. Captain Ray Fraser hiked across the craggy beach to photograph Double-Dip. Because of the tides, it was impossible to go back around the shore, so the only way off the beach was to climb the cliff.

MARS was scheduled to arrive on the 28th and preparations had been made to utilize a local skiff to land at the site. However, a storm on the 27th had taken Double-Dip out to sea and he was no where to be seen. With no corpse to be found, MARS cancelled their planned visit.

Determined to find the whale, Elizabeth Zwamborn arrived on the 28th with her drone and from shoreside she scanned for any sign of Double-Dip. She searched to the East and West of Bay St. Lawrence Harbour, but had no luck in finding him. Elizabeth decided to hop aboard the 10:30 am Oshan Whale Watch tour. Captain Cyril Fraser continued the search for Double Dip and immediately steamed the Oshan Eastwards along the beach. They quickly discovered Double-Dip had come back ashore, slightly west of its previous location, but in the middle of sharp, black swell-covered rocks.

After the tour, which sighted lots of pilot whales, Elizabeth quickly rushed to the beach to see if Double-Dip was accessible. Unfortunately, the tide and surf were too high to safely hike around the beach to reach him. So, Elizabeth promptly borrowed a Kayak, paddled to Double-Dip and performed a partial-necropsy.

At the moment, Double-Dip’s cause of death is unknown, but Elizabeth noted he appeared healthy at 19 feet long with a full belly. Elizabeth collected samples to return to the lab for further study.

It is never fun to find a dead whale onshore, or at sea, but Oshan Whale Watch is proud to volunteer with MARS and the Cape Breton Pilot Whale Project to do what we can to help. More information about Double-Dip can be found in Tom Ayers’ CBC article. Please visit MARS website to find out more about what you can do to help whales in Nova Scotia. And for information on Elizabeth and her hard-working team you can have a look at the Cape Breton Pilot Whale Project .

Overall, the August whale watch sightings were both spectacular, and somber. Every whale is special, but finding Double-Dip on the beach hit hard. All the dead pilots discovered this season are a reminder that although these creatures are plentiful in Bay St. Lawrence, we should never take them, or any whales, or any wildlife for granted. Every sighting is precious and we are thankful for any whale we see.